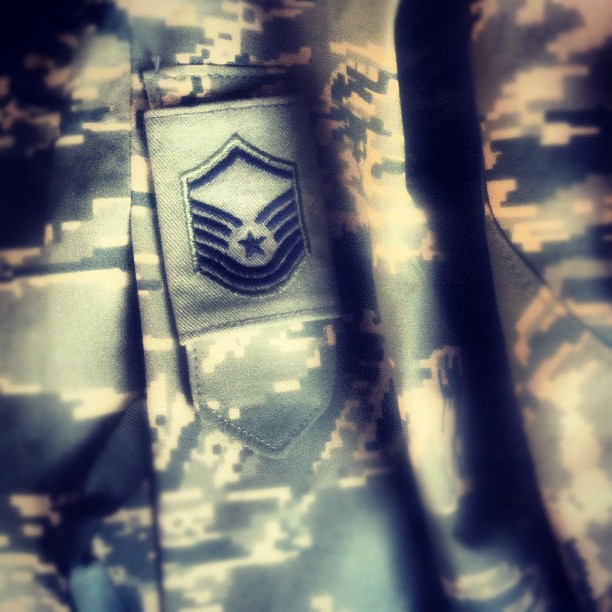 My dad’s uniform, taken on the drive to drop him of to report for duty.
I said goodbye to my dad last week. He, a master sergeant in the US Air Force, will be spending the next eight months on a military base in the Middle East.

My family knew a year ago that he would likely be sent on this mission, and it was a big part of mine and R.T.’s decision to move to Michigan when we did. He got his official orders in March, and we’ve spent the last couple of months preparing for his departure.

This has been a really difficult thing to wrap my head around because, as the title of this post might suggest, I’m not exactly the pro-war type.

Hey, by the way, did you know that we’re still at war? I can’t tell you how many people have recently said to me, “Your dad is being deployed? I thought they were bringing the troops home?” Wrong-o.

But the truth is that I haven’t been paying attention, either. With all the things I have to stress out about on a daily basis (uh, I’m thirty pounds overweight, hello! My life is a constant tragedy), I guess I forgot to make “unjust war” and “killing innocent people” a priority. I genuinely don’t know what the point supposedly is. And you know, I’ll just be honest – I think I prefer my ignorance. I recently set about reading some articles on the status of the situation so that I had some clue about what my dad is going through, but I (selfishly) can’t handle it. I’m choosing to go through this on a “need to know” basis. This situation has nothing to do with me, except that my dad is there and that effin’ blows.

I am not a patriot. I’m not an American in the way that some Americans are — maybe because I’m not a PERSON in the way some people are. I believe that lovelovelove is everything like a good artsy-granola gal, but I also believe in boundaries. I believe that I can have gratitude for the good you’ve done for me without supporting everything — or anything — you do after that. I believe that respect is a two way street. I’m not going to be bullied into giving any person, entity, or institution my unconditional approval.

I’m probably not actually allowed to rant about all of the reasons that I’m so sad and so angry that this government — who I’m truly disappointed in — gets to take my dad away for this chunk of time. If you had to guess, you’d probably come up with things like “the war on women” and “the right to marry” and you’d be on the right track. I feel like too many of the people I love are at war for their very basic rights, and now this very significant person in my life is at war for what is, as far as I can tell, no good reason.

But for as frustrated as I am, I’m at least as sad and worried. In his most recent e-mail to me, he said, “It’s safe here, but that could change at any moment. We know that and have to be prepared.”

I’m grateful that he said it. My dad, like most of the men I know, is the pat-on-the-head, everything-will-be-fine type. I’m the give-it-to-me-straight type. I have this need to acknowledge the thing that’s eating at the backs of our brains: He could die there. He might not come home.

When my thoughts go there, I remind myself of this: He could die here, too. It’s of little comfort, obviously, but it’s true. Here, death isn’t looming quite as close, and it wouldn’t be caused by an unjust war, but he could die on any day of any week — any of us could, right? All of this is very fleeting.

That’s perhaps the one good thing that has come of my dad’s deployment. As we prepared for and experienced him leaving, we all started to open up. There’s been a lot of spilling open these last few weeks. There have been a lot of “Thank you”s and “I’m proud of you”s and “I love you”s. My parents have been married for thirty years and took this chance to say all of those things that remain unsaid when we get caught up in the day-to-day. I got to tell my dad that he’s my original hero and how grateful I am that he saw my potential and made sure I saw it, too. Maybe I never would have said that to him if it hadn’t been for this.

My dad is not on a peace-seeking mission, but preparing for the mission he is on brought a lot of peace to my family. It’s not enough, but matters in it’s own small way.

I’m proud of him. I’m proud of every soldier whose heart is in the right place. I’m proud of every parent, partner, and child who has given their loved one to the military, especially those of us who don’t believe that this is a means to any desirable end. Especially us, because it’s certainly harder when you don’t see a greater purpose in this longing, this losing. I guess we can’t know, though. Maybe our soldiers are changing the world in small ways. Maybe they’re just changing someone’s mind.

I truly do believe that lovelovelove is everything. But I think we could use a lot more of it.

I love you. I’m proud of you. Thank you.

‘Til they all come home (and a number of other selected military cliches),
LC

4 thoughts on “On sending this peace-loving granola liberal's dad off to war.” 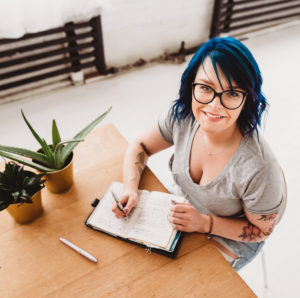 A scene from early motherhood. Laying in the hammo

Happy due date, Tiny Quinn. I sure love being your

The sun room has been a bit neglected this winter.